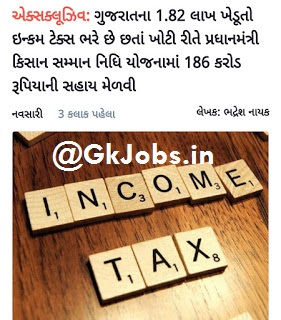 Pradhan Mantri Kisan Samman Nidhi Yojana has received information that about 1.82 lakh farmers in the state have wrongly taken assistance of Rs 186 crore despite paying income tax. In February 2019, the central government announced a scheme for farmers called ‘Pradhan Mantri Kisan Samman Nidhi’. Under this scheme, farmers with up to two hectares of land will be given Rs. It was decided to pay the assistance in 6,003 equal installments through ‘Direct Benefit Transfer’.

More than 1.82 lakh farmers were benefiting
However, some conditions were also imposed in the PM Kisan Samman Nidhi Yojana and those involved in these conditions were not eligible for assistance. One of the key conditions was that “taxpayers who have paid income tax in the last assessment year” were not eligible for this assistance. However, a large number of farmers who are paying income tax are also availing government assistance, which exploded a month or two ago.

The government started the process of getting a refund

The scandal erupted when I saw the portal of Kisan Samman Nidhi and the portal of income tax payer (list of taxpayers). Thus, such farmers from every district took assistance even though they were ineligible, but the districts with the highest number include more than 18 thousand farmers in Bhavnagar, more than 17 thousand in Amreli, more than 14 thousand in Mehsana and more than 13 thousand in Rajkot.