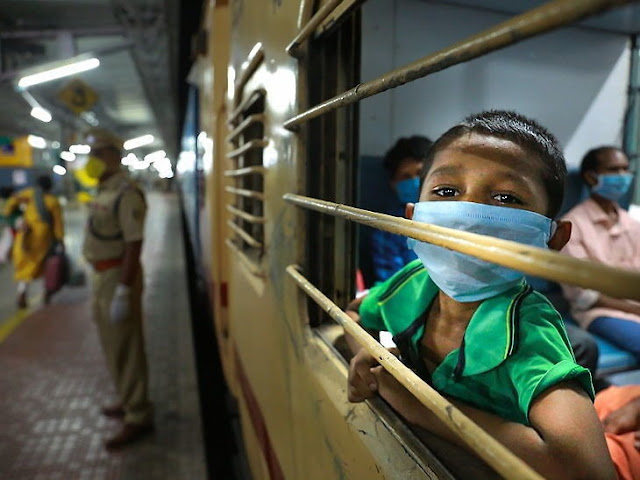 Amidst the lockdown situation, 6 special trains have been run in 24 hours for workers, students and others trapped in other states. The first train was run from Lingampalli in Telangana to Hatia in Jharkhand. She reached Hatia late at night. The guidelines issued by the Home Ministry are being fully followed while running these trains. Passengers in coaches are being seated with social distance. Thermal screening will be done from the time the train leaves till it reaches the station.


1. Jaipur (Rajasthan) to Patna (Bihar)
2. Kota (Rajasthan) to Hatia (Jharkhand)
3. Nashik (Maharashtra) to Lucknow (Uttar Pradesh)
4. Nashik (Maharashtra) to Bhopal (Madhya Pradesh)
5. Lingampalli (Telangana) to Hatia (Jharkhand)
6. Aluva (Kerala) to Bhubaneswar (Odisha)
A six-coach train carrying 347 workers reached Misrod station in Bhopal on Saturday. Those who did not have money bought their tickets to the district administration. The Madhya Pradesh government had brought about 40,000 trapped workers from other regions by buses. Now it will bring back one lakh 60 thousand workers trapped in six states by train. Chief Minister Shivraj Singh Chouhan will hold talks with the Railway Minister on Saturday to ask for 80 to 100 trains and decide the route.

Rajasthan: 1200 tourists were sent on the Jaipur-Patna train
1200 migrant workers from Jaipur, Rajasthan were sent on the Jaipur-Patna train. In addition, one thousand students have also been sent from Kota. This includes students from other states, including Zadkhand. Chief Secretary DB Gupta said workers and tourists can travel by special train to Indian Railways by paying a fixed normal fare.