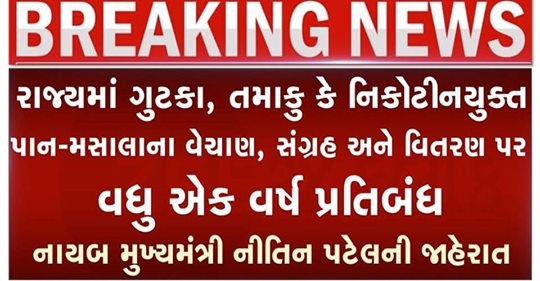 A big announcement has been made by the Gujarat government for people that consume gutkha. The ban on pan-masala gutka, tobacco within the state has been extended for another year. Deputy Chief Minister Nitin Patel said that the sale, storage and distribution of gutka also as tobacco or nicotine-containing pan masala is currently banned within the state. The government has decided to increase it for another year to enhance the health of the citizens.


The Deputy Chief Minister further said that the ban has been imposed under the principles and regulations under the Food Safety Standards Act-2006 and Regulation-2011. Under which adding tobacco or nicotine to any food item is prohibited. The presence of tobacco or nicotine in gutka is extremely harmful to human health. the choice has been taken to ban gutka to take care of the health of citizens and future generations. it’s going to be mentioned that a fine of Rs 11 lakh has been collected thus far after investigating about 10,000 firms within the state.

He said that the choice was taken by the government to ban the sale, storage and distribution of gutka or pan masala which contains tobacco or nicotine. Strict action is taken against those that violate this rule.


Restrictions on the sale of cigarettes and substances containing tobacco or nicotine within a radius of 100 metres of an academic institution are being strictly enforced by the system. during this regard, within the last three years, about 10 thousand firms are investigated by the food and drug regulatory body of the health department and about fine of Rs 11 lakh has been levied.