Home  »  LATEST NEWS   »   Digital media rules: Govt says there should be a forum for millions of users to complain, who has posted the wrong content

Union Minister Ravi Shankar Prasad on Thursday unveiled new guidelines for social media, OTT platforms and news websites. He said users against social media abuses and misuses should get a forum to resolve their grievances within the time limit. Companies should make arrangements for that. 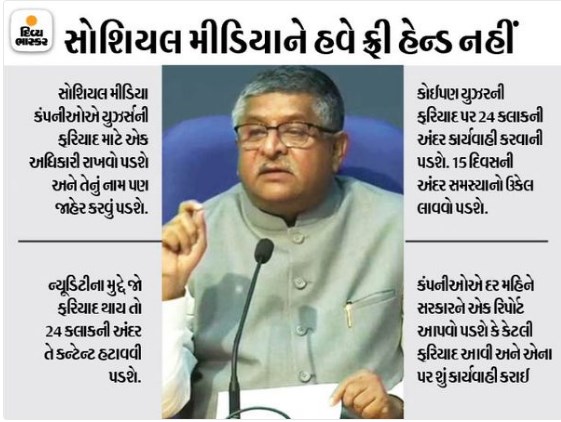 Social media companies should have an official to listen to complaints and also disclose his name. This officer must clear the complaint within 15 days. If the complaint is about nudity, the content attached to it should be removed within 24 hours. If you delete the content of a social media user, you have to give sufficient reasons. You also need to specify who posted the wrong content the first time. Information and Broadcasting Minister Prakash Javadekar has said about OTT and digital news portals that they have arrangements to control themselves there. Arrangements are made for OTT in the same way as there is a censor board for films. The content displayed on it should be age-appropriate. 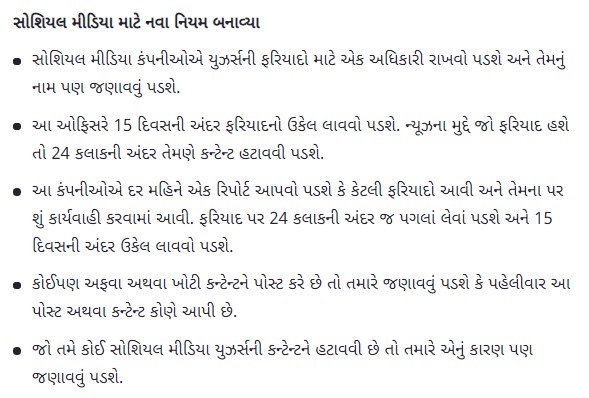 Has become a platform promoting people who spread violence


“We received a complaint that social media has become a platform to promote criminals, terrorists and those who spread violence,” Prasad said. WhatsApp has 50 crore users in India. Facebook has 41 crore users. Instagram has 21 million users and Twitter has 1.5 million users. There have been complaints of misuse of social media and fake news. This was a matter of concern, so our government has decided to prepare guidelines for such a platform. Freedom of the media is freedom of democracy. But every freedom is full of responsibility.
Rules new rules for social media
Social media companies have to have an official for users’ complaints and also mention their name.
This officer must resolve the complaint within 15 days. If there is a complaint on the issue of news, they have to remove the content within 24 hours.
These companies have to submit a report every month on how many complaints have been received and what action has been taken on them. Complaints must be dealt with within 24 hours and resolved within 15 days.
If you post any rumors or false content, you have to say who posted this post or content for the first time
If you want to delete the content of a social media user, you must also state the reason.
Guidelines for OTT and digital news


There will be a 3-phase mechanism for OTT and digital news. Everyone will have to give their information. There are no special rules for registration but specific information must be provided.
A system is created to resolve complaints. He will have to create a self-regulation body. It will be led by a retired Supreme Court or High Court judge or someone of the same level.
If there is a need to take immediate action, an arrangement should be made at the government level. Who sees events like this.
Like movies, OTT platforms will have to follow program code. Content must be classified according to age. That is, what content is appropriate for individuals of what age. It will be divided into 13+, 16+ and A categories.
Arrangements like parental lock are arranged. So that parents can block some kind of content for their children which is not suitable for them.
READ OTT GUIDELINES FROM HERE


OTT and news websites should be given the opportunity to create self-regulation twice
Union Minister Prakash Javadekar said that crores of OTT platforms have come up like digital media news portals. Those who come from the press have to follow the code of the Press Council, but there is no obligation for digital media. Cables with TVs follow the code under the Network Act, but there is no such rule for OTT platforms. The government has thought that there should be a single judicial system for each media platform. Everyone has to follow certain rules and make arrangements for that. 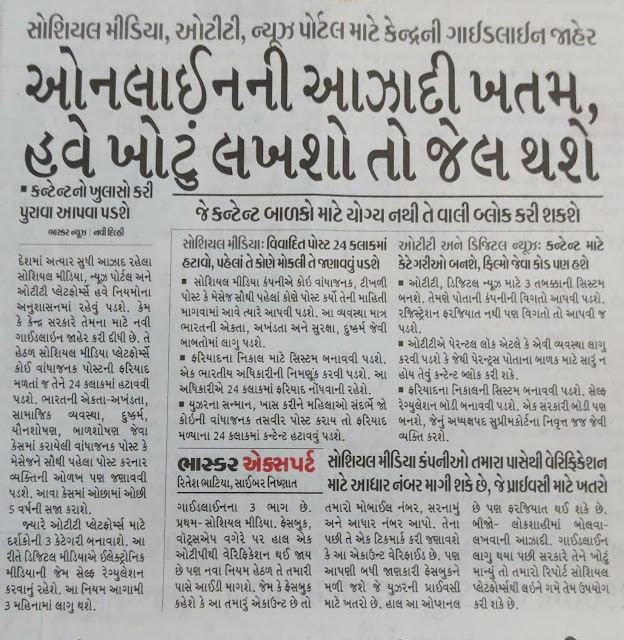 For that, 50 questions were asked on OTT in both the houses. We then called a meeting of OTT affiliates in Delhi, Mumbai and Chennai. We talked to them about self-regulation, but it didn’t happen. At the second meeting we asked to make arrangements within 100 days, but that did not happen. We then asked to prepare an institute system for the media.
અહીંથી વાંચો સંપુર્ણ ગુજરાતી રીપોર્ટ