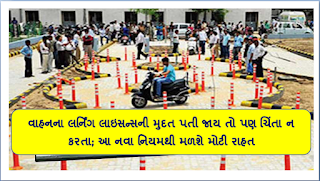 The driver will only have to undergo document verification at the RTO office attached to the transport software referring to his old learning license and then he will be able to get the learning license again.

RTO will also reduce the workload of learning licenses.

Prior to this, even the money for compulsory crop license was not refunded at the time of learning license. According to RTO sources, out of an estimated 50 tests a day, 30 to 40 percent fail the test track. Of these, 80 percent have to re-acquire their learning licenses. According to this figure of Rs.500, the government used to get more than Rs. 3 lakhs in a year. Now changing the rule will benefit applicants.


The fee for renewing the learning license is only Rs

In addition, the biggest benefit to the driver under this provision will be that in Sarathi-2 software, the amount of Rs. Now, when re-applying for a learning license, you will have to pay only Rs 150 for a learning license. If the test is not given by the citizen even once, the test fee money will also be valid again. Payment will only be made if no action is taken within a year of the issuance of the learning license. The government’s open looting of citizens for years since the launch of Sarathi-2 software will come to an end with a circular issued on September 7.