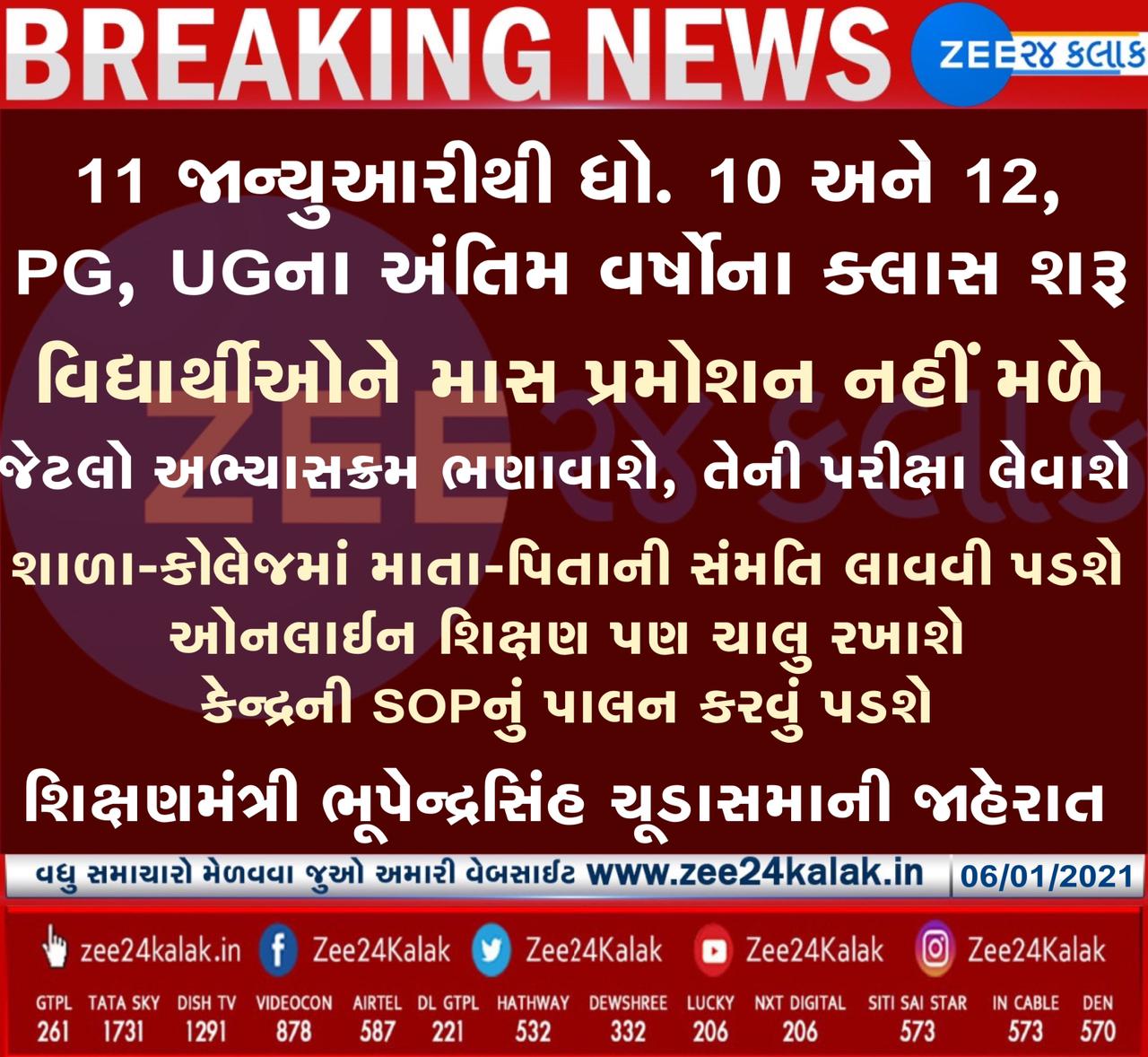 The decision to open Std 10 and 12 schools from January 11 was taken at a cabinet meeting, Education Minister Bhupendrasinh Chudasama announced today. The state government has started preparations to start schools as per the central government’s Corona guideline. It has been decided to start classes from January 10 and 12, PG and last year’s college.

All Gujarat boards, government, secondary schools will be started, only Std. 10 and 12 classes will be started, besides final year classes of the college will be started. Education Minister Bhupendrasinh Chudasama said during a press conference that the attendance of students is not mandatory after the commencement of schools. As well as the consent of the parents is not required. He said that at present no decision has been taken to give mass promotion in standard 1 to 8. In addition, the schedule of the examination will be announced later. The number of courses taught will be the same as the number of courses taught. Online education will continue in schools. In addition, as per the SOP of the Central Government, social distance has to be observed, schools have to arrange thermal guns and soap. Chudasama said other standards would also be considered in the near future.

Schools and parents have to take care of these things

Sanitation facility has to be provided in every campus before starting school-colleges.

Students should be provided with thermal gun checking, sanitizer and soap arrangements for hand washing.

Social distance should be maintained in the classrooms and in the school-college complex. Not only that, the mask should be used compulsorily.

It is also important to ensure that medical services are available within close proximity to the school-college.


Following the SOP of the Government of India, the online education system provided by the schools and colleges in the state will remain the same.

The SOP will be applicable to all government, grant-in-aid and self-finance schools, Kasturba Gandhi Balika Vidyalaya, social justice and empowerment department as well as Adi Jati Vikas department schools of all the boards in the state.

From November 23, Std-9 to 12 schools as well as PG, Medical-Paramedical and undergraduate final year classes will start in the state.

The government will announce later to take appropriate decision in time to start the academic work of the remaining classes-standards.


Student attendance at school is not mandatory.

Institutions must also obtain the written consent of the student’s parents or guardians to attend school.

Students will also be asked to bring their own masks, water bottles, books, snacks, etc. from home and not to interact with other students.


According to the revised seating arrangement in the classroom, there should be a distance of at least 6 feet between the two students.

The principal-principal will have to arrange for the students to come in stages so that there is no overcrowding in the school-college campus.For this purpose, the state government has asked to make arrangements for Odd-Even i.e. three days a week for Std. 9th and 11th and three days for 10 and 12 in the school as per requirement.It is also suggested that students come to school on the scheduled days of the week and do homework assignments on the remaining days.It is also advised not to play sports or any other group activity on the field of mass prayer.Parents will be encouraged to use their personal transportation to get the child to and from school.Students who use public transport will also be given appropriate precautionary guidance from the school.