Only a child who has attained six years of age will be admitted to class 1 from the year 2023-24 onwards. The education department has come up with a notification regarding the same. The government has decided to implement the rule from 2023-24 onwards so that students who are at present studying in nursery and kindergarten sections are not inconvenienced. 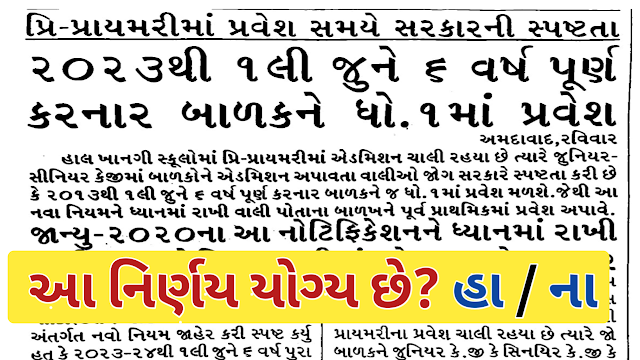 For the year 2020-21, 2021-22 and 2022-23, children upto the age of five can be admitted to class 1. The notification states that a child should have completed six years in June to be eligible for class 1 admission from the year 2023-24.
It should be noted that under the Right to Education (RTE) Act, children between the age of 6 and 14 years have to be provided free and compulsory education. The Gujarat government’s decision to allow those younger than six years to class 1 was in conflict with the Act and it had raised concerns in several quarters.
An association of schools and a private school have approached the Gujarat High Court challenging the Gujarat government’s direction to the latter to admit children under the age of 6 in Class 1 under the Right to Education (RTE) Act.
The petition comes after the state education department directed Udgam School to admit 33 children, who have not completed six years as on June 1, to Class 1. It was also directed to admit another child of more than 10 years in the same class. The school said that it had confirmed admission of 15 other students allotted to it under RTE in Class 1.


In the petition, Udgam stated that as per the RTE Act, a child must have completed six years before June 1 to get admission in Class 1.
It also challenged the validity of Rule 3 (1) of the Right of Children to Free and Compulsory Education Rules, 2012, of the Gujarat government which states that an elementary school would not normally admit a child who has not completed six years on the date of admission, but adds that a child desirous to be admitted on completion of five years of age shall be admitted.
Gujarat Education: Click here