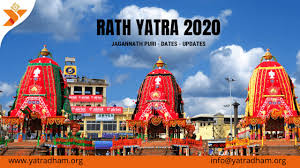 Jyatra live takes place on the day of unripe seeds. However, the 142-year-old tradition in Ahmedabad has broken for the first time. Today the Lord will not go out on the township and the chariot will be circled around the temple in a rathyatra. Chariots will not be taken out of the temple complex. Besides, no devotee will be allowed to enter all the rituals.

Ahmedabad Jagannath Rath yatra live– CM Vijay Rupani cleaned the way of Lord Jagannathji’s chariot with a gold broom. The three chariots will then depart, although the chariot will orbit the temple complex.
– CM Bijal Patel, Pradipsinh Jadeja are also present along with CM Vijay Rupani.
– CM Vijay Rupani reached Jagannath Temple with his wife Anjali Rupani. Pahind will perform the ritual in a few minutes.
– Gajraj was worshiped in the temple premises

The procession of Lord Jagannath, the pride of Gujarat, traditionally takes place in Ahmedabad every year on the day of Ashadh Sud Beej. In this rathyatra, which is considered a symbol of Hinduism, Lord Jagannath, Balram and sister Subhadra set out on a city tour in a chariot.

Lord Krishna went out of Dwarka with his brother Lord Balram . When Krishna 16108 ranioe Rohini her (Balarama’s mother) asked that we serve the same Lord Krishna, however, the day Lord Krishna and Radha is why the name. Then Rohini’s mother said if Krishna and Balram do not enter the palace, I will say.