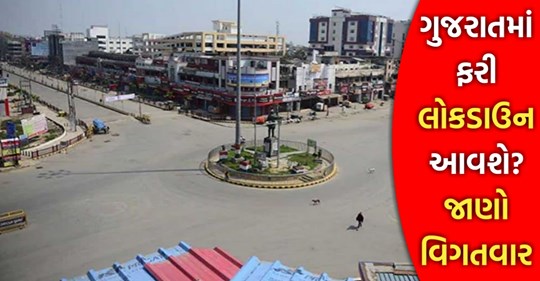 Corona’s condition is becoming more and more serious in Gujarat as mortality and cases are surpassing alarming numbers. Today, for the first time, the highest number of 510 cases of Corona has been reported which has become a cause of concern among the people. Unlock-1 has been declared due to the upcoming elections. However, Deputy Chief Minister Nitin Patel has termed this as just a rumor.


Corona’s condition is worse in Jarat than in any other state. Veterans have even expressed fears of community transmission in Delhi-Mumbai.

Corona has also moved in this direction in Rajasthan due to which the borders connecting Rajasthan and Gujarat have been re-opened Once sealed. In the midst of such a situation, the situation of Corona in Gujarat also became uncontrollable. Given this situation, people are speculating that there may be another lockdown

There is also talk among the people that the state government has given more concessions in Unlock-1 for the Rajya Sabha elections, though the government is making efforts to ensure that everything in the state goes on as usual.

Even before this, such a rumor was rife and people had to ask each other whether the lockdown was really going to take place. Such rumors have raised concerns among traders in particular.