Home  »  LATEST NEWS   »   Self-reliant India: Now all indigenous apps will get one place, friends have prepared a new platform; Learn what is specially

Self-reliant India: Now all indigenous apps will get one place, friends have prepared a new platform; Learn what is specially

ago in the App, Indigenous Application of Many Category, including Business, E-Learning, News, the self-sufficiency app can only be downloaded to the Android user, after the ban on the ticket, the Indian Short Video App Friends Special thing is that in this app, the user will find Developing Apps in India according to various service and need. There is many other category indigenous apps, including business, e-learning, news health, shopping, games, utility, entertainment, social, games, utility, entertainment, social. 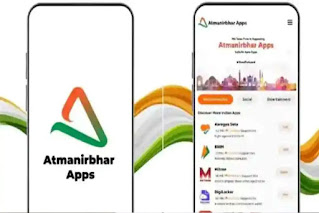 Mitron TV said the app visions to strengthen homegrown technology by making it easier for users to identify Indian apps for their various needs. Currently, the platform hosts more than 100 apps and plans to bring 500 apps by the end of this year. The platform hosts apps from categories such as e-governance, utility, agriculture, gaming, entertainment, lifestyle and e-learning. Atmanirbhar Apps features apps such as Kifayat, Grocit, Jain Thela, Home Shoppy, YourQuote, Vridhi Stores, Xploree AI Keyboard and mParivahan besides others.

Shivank Agarwal, co-founder and CEO Mitron said, “It gives me immense pride and pleasure to bring Atmanirbhar Apps to the Indian users on the National Unity Day. After prime minister Modi’s clarion call in May this year to be Atmanirbhar, and to focus on the creation of a Made in India ecosystem, we felt that it’s highly important to let users discover noteworthy Indian apps that are doing exceptional work to keep India running. This is a small effort by Mitron TV to celebrate self-reliance and promote domestic businesses.”

At present, the self-sufficient app will only work in Android devices. The self-sufficiency app can be downloaded in the Google Play Store is available in free. It allows to identify and find more than 100 Indian Apps created by your local developers. It is also the option of making self-sufficient vows to support the self-reliant India initiative launched by the Prime Minister. No registration in the app will not be required. After downloading it seems to appear directly to the indigenous app, which can be downloaded. It includes many indigenous apps, including health bridge, BHIM App, Narendra Modi App, Jio TV, Digiler, Kagaj Scanner, IRCTC Rail Connect. 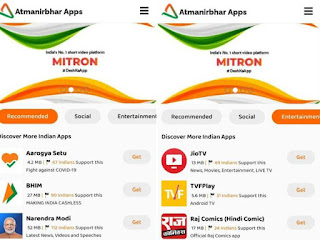 
All information related to the App is found in the list, the size of the list, how many Indians have entered it and get brief information about what the app works. The download size of the self-sufficient ep is 12MB. At present, the platform claims to host more than 100 apps and plans to bring up to 500 apps in the end of this year. The platform hosts many types of apps from e-governance, utility, agitation, agility, gaming, ententment, lifestyle, e-learning category. These self-sufficient cheaper, grocet, jain bag, home showby, URCOT, deduct store, Explorer AI keyboard, M. Popular Apps like Transportation. The button of ‘Get App’ is the button on the side of the list, which is reached on the user direct Google Play store, which can be downloaded from the App. The company has not given any clarity about whether or not it will be released on the iOS platform.