Under the new education policy, new subjects will be taught to the students of Gujarat schools to make them aware of Indian culture and heritage. Earlier, the government had announced to teach Vedic Mathematics to students of Std. 6 to 10. Then this time from the academic year 2021-22 in Std. 11 and from 2022–23 in Std. 12 as an optional subject new subject will be introduced in 223 schools of the state. The state government has decided to introduce a total of 7 new subjects. Education Minister Jitu Waghan tweeted this information. 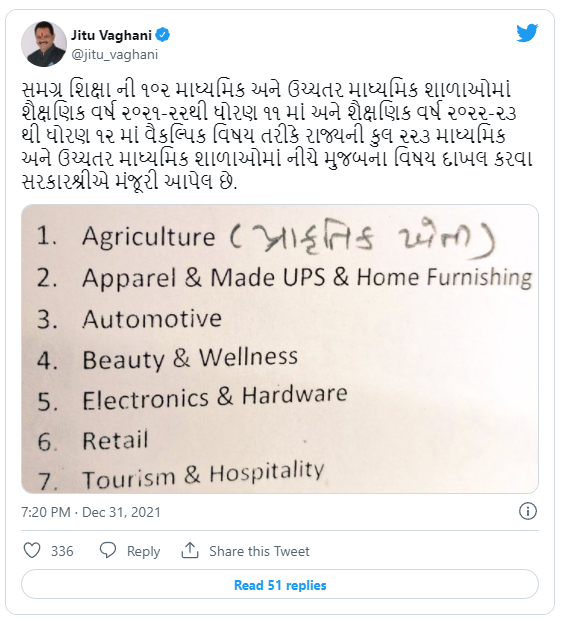 Students of Std. 10 and 12 will have to
appear for the examination with 100% course. Due to Corona, offline schools have started in Gujarat after one and half years, which has also affected education. In this too mass promotion had to be given to students of standard 10 and 12. Although schools have started this year, but CBSE has reduced the number of courses by 30%, students and parents are also demanding 30% reduction in courses before the Gujarat Board. However the Department of Education has explicitly refused to reduce the course, which will cause students to work hard and may affect the outcome.

Indifference in schools to start skill courses
Under the new education policy, it was decided to start skill development courses in every secondary school, under which vocational education would be started in about 60 schools in Ahmedabad. Even after the circular of the education department, only 2 schools have been allowed to start vocational education. Every school believes that if it starts vocational education then it will have to arrange the teacher itself. While this issue has also been considered by the government. There will be no financial burden on the schools, but the schools should make arrangements for this on their own campus, so that the children will get information of various skill based courses along with their studies. Also the courses started in the schools will help the student for future job, but the schools are not joining this course for their own interest.