Understand what has changed in 73 years in graphics: In 1947, the price of 10 grams of gold was less than Rs 89, today not even 2 liters of milk come from it. 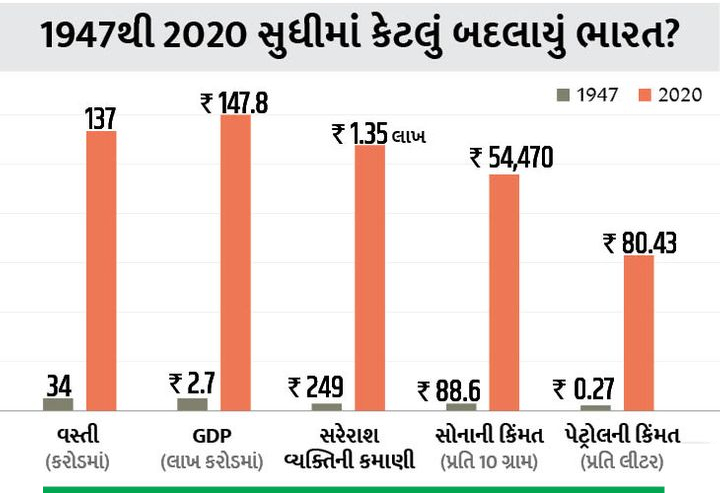 India’s population has quadrupled in 73 years, from 340 million at independence to more than 137 million now


In 1947, the price of 1 liter of petrol was 27 paise, today it has crossed Rs 80
What do I do if I have 27 paise? You would say that it was closed years ago. You are right. Even though the money is of no value today, on Independence Day, i.e. 15th August 1947, 1 liter of petrol could be bought for that amount. At that time, 10 grams of gold could be bought for the same amount of petrol as 1 liter of petrol is available today. At the price of a liter of petrol today, one could travel four times by train from Delhi to Mumbai in those days.
Today you earn Rs 249 in a day. Or spend more than that, but that was the annual income of the average citizen at that time. The country has changed in many areas in the last 73 years. What was the situation in the country at the time of independence and what is it today? Here is the detailed answer.
1. How much has the population of the country increased in the last 73 years? 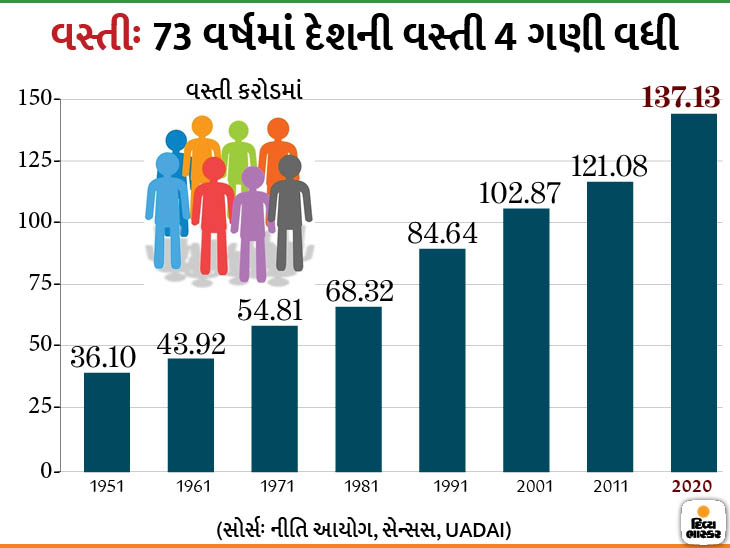 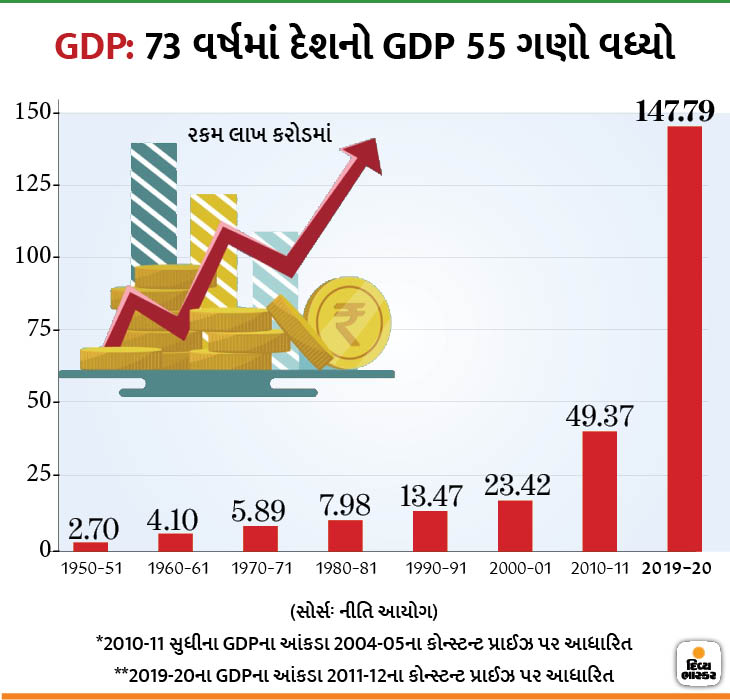 GDP is the most basic measure of a country’s economic potential. It is said that when the British cam to India, India’s share in world GDP was 22%.
This means that by the 18th century, India’s GDP was the highest in the world. But due to the exploitative policy of the British, the country’s GDP continued to decline. When the country was liberated from the clutches of the British, the GDP was Rs 2.70 lakh crore. At that time, India’s share in the world’s total GDP was only 3%.
But since independence, India’s GDP has grown more than 55 times. GDP in 2019-20 is estimated at 147.79 lakh crore. Today, India is the 5th largest economic power in the world and accounts for more than 4% of the world’s GDP.
3. How much did the average Indian earn in 73 years of independence? 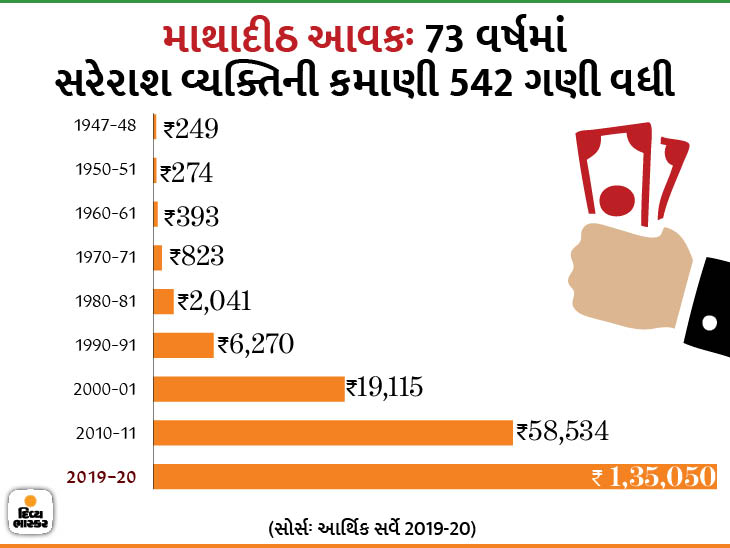 Today, even a well-planned mobile recharge for Rs 249 is not available. Some people’s daily expenses are more than Rs 249. But when the country became independent, the average annual income of an Indian was Rs. 249 was the same.

However, it should also be noted that since independence, the average Indian’s annual income has increased 542 times. At present the per capita annual income of the country is 1 lakh 35 thousand 50 rupees. Is equal to. That means 11 thousand 254 rupees per month.
4. How much poverty has decreased in the country after independence? 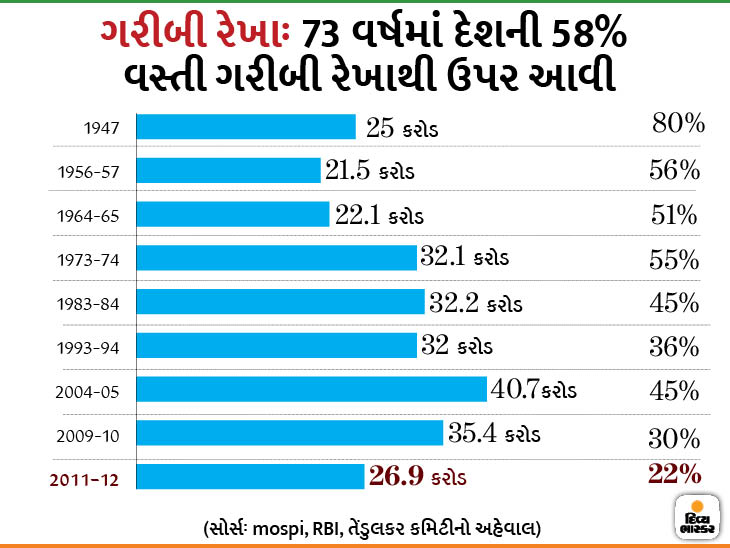 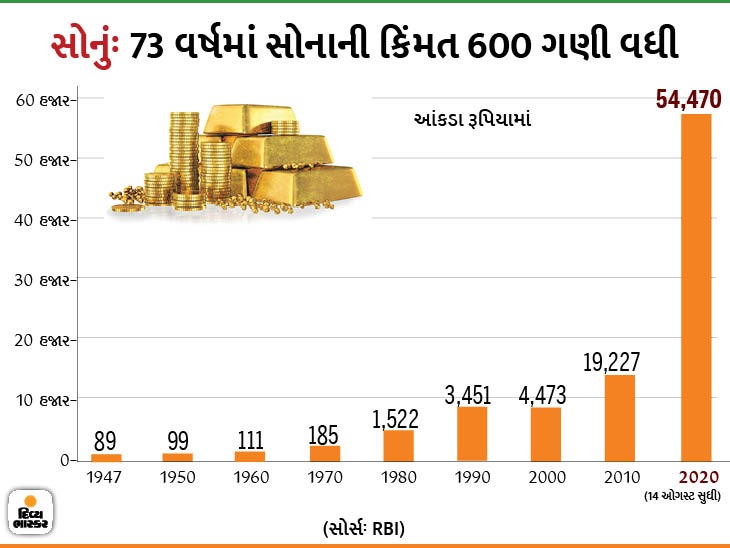 It is a well-known fact that at one time India was called the Golden Sparrow. The reason was that every household in the country must have gold. Even today, more gold than the GDP of many countries of the world is stored in our temples. According to World Gold Council data, about 25,000 tonnes of gold, valued at more than Rs 75 lakh crore, is stored in Indian homes and temples.

One of the reasons for the traditional attraction of Indians towards gold is that its price is constantly rising. So it is easy to get cash by pledging gold as per requirement.
Now let us also know that at the time of independence, the price of 10 grams of gold was only Rs 88.62. Was. Today, the price of gold per 10 grams is more than 54 thousand rupees.
This means that in 1947, we could buy 10 grams of gold for the same amount, today we do not get even 2 liters of milk for the same amount. Because today the price of 1 liter of milk is also an average of Rs. Is equal to.
6. How much has the price of petrol gone up in 73 years? 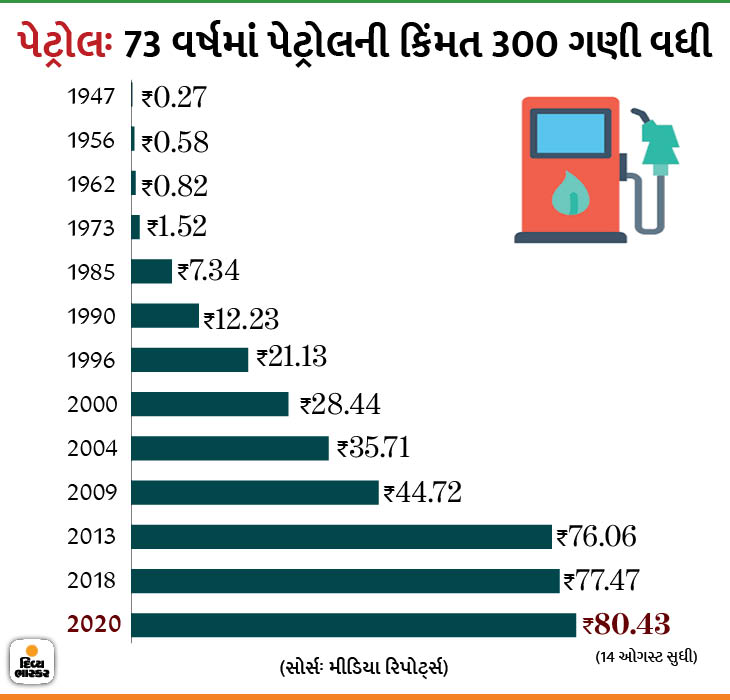 Talk of petrol after gold. But first let me tell you how many carriages we had there at the time of independence. The Ministry of Road Transport has been keeping vehicle registration data since 1951. At that time there were around 3 lakh vehicles registered in the country. That means there were less than 3 lakh vehicles in our country at the time of independence. At present more than 300 million vehicles are registered.

During these years not only cars but also petrol prices went up. At the time of independence, a liter of petrol was available for only 27 paise. But today a liter of petrol has gone up to more than Rs 80. According to this, petrol has become 300 times more expensive since independence.
7. Railway passenger growth in 73 years? How much did the rent go up? 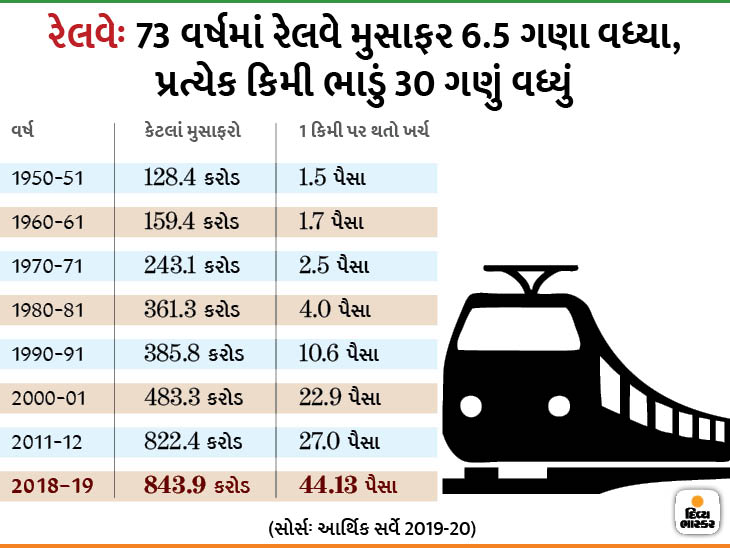 On April 1, 1853, the first train ran in our country. It was the first train to cover a distance of 33.6 km between Mumbai and Thane. Then gradually the railway line grew and the railway became the lifeline of India. Lifeline is because train is the medium through which millions of passengers can travel daily.
When India-Pakistan split, the railways were the only means by which people were coming from India to Pakistan and from Pakistan to India. Currently, during the Corona epidemic, the railways are the only way to get migrant workers home.
The reason for calling it a lifeline is also because the number of passengers traveling on it is increasing every year. In 1950-51, 128 crore people traveled in a train year. The number has increased to 843 crore in 2018-19. The number of people traveling by train has increased 6.5 times over the years.

The number of passengers has increased. Inflation has also risen. The railway network has grown. Naturally the rent also goes up. So understand that in 1950-51, the railways used to charge 1.5 paise per km. While in 2018-19, the fare is more than 44 paise per km. According to this, the railway fare has increased 30 times.
If we talk about the revenue of the railways, in 1950-51, the railways used to get revenue of Rs 98 crore a year from the passengers. In the year 2018-19, the revenue of the year was 50 thousand crores.
8. How much has the expenditure of Central Government increased in 73 years? 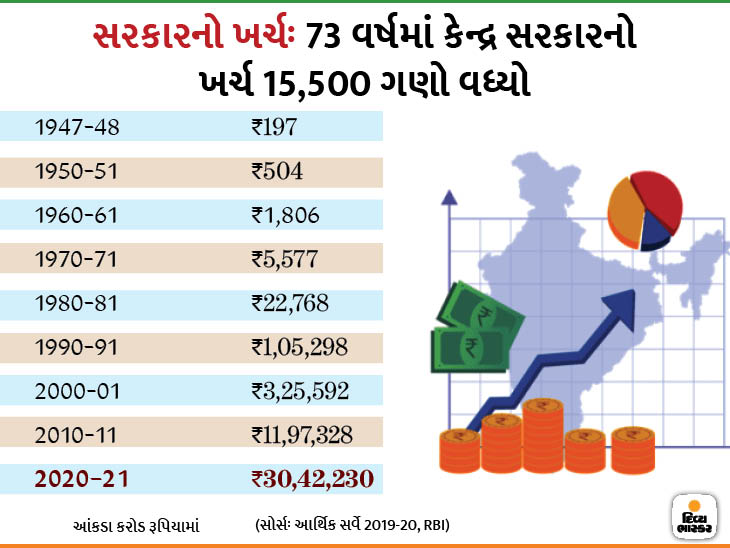 If everything is increasing then let’s take a look at the expenditure of the central government. Our first budget came when we were free. That first budget of independent India was from 15th August to 31st March 1948. The government had set aside Rs 197 crore in this budget.
Since then, the budget of our country has increased more than fifteen thousand times. In the budget presented by Finance Minister Nirmala Sitharaman in 2020-21, the government had set aside Rs 30.42 lakh crore. This money will be spent on our health, education, national security, development and other places.
9. How much has the rupee weakened against the dollar in 73 years? 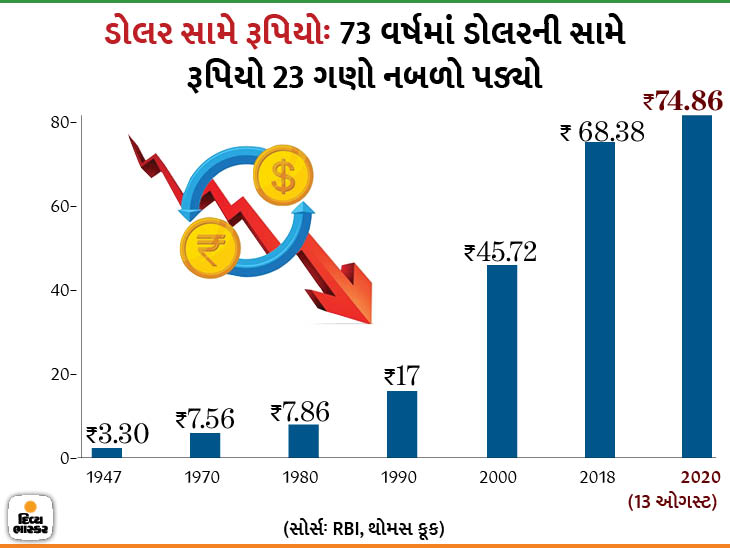 Now also understand what is the effect of weakening rupee? Because it affects not only the government of the country but also the people. how? So that’s because the dollar is the only currency of trade around the world. If we want to buy anything abroad, we have to pay in dollars. This increases inflation.
10. How much has the Foreign Exchange Reserve increased in 73 years? 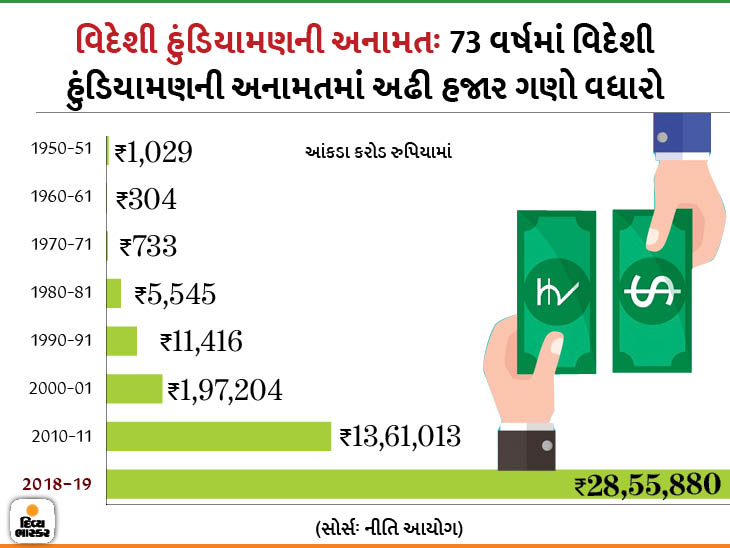